Home / About Our Club

St Joseph’s GAA Club, Ballycran is the GAA club that serves the Parish known as Ardkeen. It was established in 1939 by Hugh Gilmore, Pat Hamilton and Master Frank McKenna to provide hurling for the local boys and men of the Parish.  The colours of Black and Amber were chosen in tribute to Master McKenna’s long-time friend – Kilkenny’s Lory Meagher.

1939 to 1949
Ballycran played their first match in 1939 against an also recently formed Ballygalget team and won on a score line of 2-0 to 0-0. In their first year, the team were expected to be in the building process, however, they ended the year with a record of 7 wins, one draw and one loss.  This therefore qualified them for their first ever Ards league final.  However, they were beaten by a team called Éire Og by two points.

This excellent first season saw Ballycran begin to grow and establish themselves as enthusiasm for the GAA grew within the Parish.  In 1940 and 41 Ballycran were again runners up in the Ards league and eventually they entered the Down league in 1941 and reached the Down Junior Championship final in the same year only to be beaten by a team called Clanvaraghan.

By 1942 Ballycran had won their first ever Ards League and followed this with victory again in ’43, ’44 and were the competitions last ever winners in 1945.  By 1947 Ballycran were playing in and had won the South Down league and in 1948 they were the beaten finalists in the Down Senior Championship.  However, the following year saw a break-through in hurling in Down, as Ballycran won their very first Down Senior Hurling Championship.

1950 to 1959
By 1950 Ballycran were now a force to be reckoned with and were widely respected in Down.  In the same year Ballycran had won their first ever Down Feis sevens and had their first ever player to represent Ulster – Davy Bell.

In 1953, Ballycran would win the Down Senior Hurling championship against a strong Ballela side, while also tasting victory in the league and the Feis sevens competition.  Ballycran then had to wait another four years to be crowned once more, champions of Down in 1957 with Hugo O’Prey being selected to represent Ulster in the same year after impressive performances for both club and county.

By 1958 the club had grown extensively and Ballycran, for the first time, were able to field a second senior team in a B league with the team securing a league victory in their first year and in 1959 also brought home the Junior championship.  It was also in 1959 that the club was first accepted into the Antrim league and to this day they are still competing in this competition.

1960 to 1969
1960 saw Ballycran making history as they were the first team to win both the Minor and Senior championships in Down, in the same year.  The senior championship was then retained the following year. At this time, Ballycran had a successful football team who were competing in the Junior ranks, however they were defeated in the championship final in ’61.

In 1964, Down hurlers were crowned as All Ireland Junior champions with 5 Ballycran players all highly involved. This was the first major success for the county team at national level.  While 1965 saw the Ballycran men regain the Feis 7s and the Junior league.

June 1966 still proves to be one of the most important landmarks in Ballycran’s history when on June 26th 1966, McKenna Park was opened.  Although Ballycran did not win the Down Senior championship in 1966, this was the first year they did win the Antrim league.  However, both the Junior and minor teams were successful in winning their respective championships.  For the first time in six years, Ballycran regained the championship in 1967 with a win over Portaferry.

1968 saw more success for the County team, however this time it was the minor team.  Led by Ballycran man Jimmy Hughes they defeated Kildare in an All-Ireland final in Croke Park.  In the same year the Ballycran Minors were crowned county champions and regained the title the following year.

By 1961 female participation in Ballycran had begun with the first ever camogie team to field and by 1967, they had won their first league and championship.  The following year they were defeated in the championship final, but again in 1969 they were again crowned champions of Down.

1970 to 1979
The 1970s saw Ballycran grow in strength and in 1972 the McVeigh cup was back in Ballycran and this saw the club, for the very first time, compete in the Ulster Championship.  Unfortunately, the team were beaten on the day by a strong Rossa team.  The senior team proved to be very successful from ’72 to ’77 winning the Down league for six straight years, however 1974 was a year to remember. Meanwhile there was also some success for the Gaelic footballers who were the first Ards team to win a down title in 1972.

The senior hurlers retained the Down Senior Championship after beating Portaferry in the championship final.  This led them to the Ulster Championship Semi-final against Dungiven. The ‘Crans’ came out on top and now, looking forward to the final against Sarsfields.  Ballycran went into the game as underdogs but by the final whistle they had come out on top by a score line of 3-5 to 3-2.  They had again created history as the first Down team to be crowned Ulster Club Champions. 1976 was another glory year for the men in Black and Amber with the Senior hurlers recapturing the Senior Championship after losing out in ’75 to Ballygalget.

Ballycran drew the ’76 final with Portaferry.  The replay was held on 5th September with the minor and intermediate championship finals on beforehand. Ballycran were victorious in all three matches.  In the Ulster Championship Ballycran defeated Cuchullains of Armagh and were to meet the Antrim Champions Rossa in the final.  Ballycran took victory in the final, beating Rossa by one point. Subsequently, Ballycran were beaten in the All Ireland Semi-final by Camross of Laois.  Ballycran regained the Down Senior championship in ’77 only to be beaten in ’78 by Portaferry.  After a very successful decade, Ballycran ended the 70’s as Down champions in ’79.

1980 to 1989
The Ballycran Senior hurlers started the 1980s where they had finished the 70’s as Down Senior Champions. However, ’81,’82, ’83 saw the senior championship exchange hands to both Ballygalget and Portaferry.

In 1984, the centenary year for the GAA, Ballygalget were expected to win their third championship in a row, however the Cran men had other thoughts, running out as 2-10 to 1-11 victors. The under 14 team in the Centenary year were also the winners of the Down Féile and went on to represent Down in the All Ireland Féile. The senior hurlers went on to win four Down senior championships in a row only to be stopped by Portaferry in 1988.

In the meantime, Ballycran had further juvenile success with Féile, U16, Minor wins while also winning Junior and Intermediate championships and leagues.  1989 saw the 50th anniversary of the club with a Golden Jubilee tournament organised involving Oulart (Wexford), Camross (Laois), Ballycran and Ballygalget. The first 50 years of Ballycran saw huge success in the club, but more was yet to come.

1990 to 1999
The early part of the 1990s saw a slight drought in the number of Senior championships, with the Senior Hurling Championships changing hands between Ballygalget and Portaferry.  However, that was all to change in 1993, where the Ballycran hurlers led by Captain Dermot Woods defeated Ballygalget in a tightly contested final.  Following this, the senior hurlers won their Ulster semi-final and were through to the final against Cushendall.  In the final, the Senior hurlers came out victorious in a score line of 2-10 to 0-12 and so achieved their third Ulster Senior Club title. 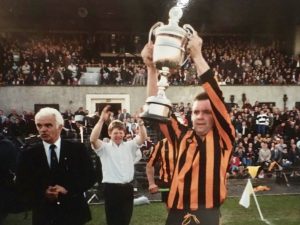 Following the Ulster victory in 1993 the senior hurlers went on to win another two successive Down Championships in 1994 and 1995, however their run was ended by Portaferry the following year in the championship semi-final.  Unfortunately, this was the end of Ballycran’s winning streak in the 90’s as the title then changed hands between Portaferry and Ballygalget and the McVeagh Cup did not return to McKenna park until 2007.

However, at this point Ballycran saw more success through their juvenile teams with the u14 hurlers and camogs registering Féile victories.  With fantastic work being put in at juvenile level, Ballycran were building for the future, hoping that there was more success to come in the new millennium.

2000 to 2009
Unfortunately, the early naughties brought little success for our senior hurlers and camogs, however the juveniles in the club had other ideas with Minor and under 16 titles won by both the girls and the boys.  It was the U14 boys and girls though that brought the most success to the club.  They were not only recognised in Down and Ulster but both the hurlers and camogs won, All Ireland Féile titles within the space of 3 years.

The Under 14 boys and girls travelled south to Meath and West Meath in 2003 staying with the under 14 hurlers in Killyon.  In the final they met their Ulster counterparts Middleton from Armagh.  After the final whistle went, the Ballycran boys ended up as winners bringing back all Ireland silverware to McKenna Park.

Both the girls and boys again travelled to Cork together in 2006, however, it was the under 14 girls turn to copy their male counterparts.  They travelled to Cork to play in Division two of the National Féile, eventually reaching the final in Parc Ui Rinn.  They met Ulster counterparts Ballinascreen defeating them by one point.  By the end of the naughties the extra work that was put in to the under-age hurling and camogie was beginning to pay off.  In 2007, the senior hurlers registered their first Down Senior championship win in 12 years.  However, perhaps the most significant result in 2008 was the fact that the senior camogs bridged a 39 year gap winning the Down Senior camogie championship in a replay against Clonduff in Portaferry.  The senior hurling championship then returned to McKenna park in 2009 with Ballycran registering a 1-14 to 0-12 against Ballygalget.

2010 to date
2011 and 2012 saw the senior camogie team register two more Down Senior championship titles, however in 2012 they did not stop there.  In the Ulster semi-final, the camogs defeated Keady in home territory to set up a final clash in the Armagh Athletic Grounds against Eglish from Tyrone.  Having been defeated the previous year by Coleraine the girls were determined not to have a repeat of that result. When the final whistle went, they came out on top with a victory. This group of girls became history makers as the first Ballycran team to win an Ulster Senior Camogie title.  2012 was an all-round history making year as the Senior Hurling team also won the Down Senior Championship. This was the first time ever that a Down club had both the Senior Camogie championship and Hurling championship in their possession. Unfortunately, after this, both teams had a short drought with the next hurling championship victory recorded in 2015.

In 2018, Ballycran won the Down Senior Hurling Championship, beating Portaferry in an exciting final at Mitchel Park, Ballygalget.  Ballycran went on to defeat Slaughneil in a dramatic Ulster semi final round at Corrigan Park.  Sadly, our journey for another Ulster title came to an end as Cushendall took advantage of an early lead in wintry conditions at the Armagh Athletic grounds final.

Ballycran prides itself as being an inclusive ‘one Club’, with a progressive thinking committee and plans to stay relevant and modern within the community.  At the time of writing (2019), the Club has embarked on a significant ‘build’ project, where new sporting amenities will enhance the Club’s offerings to members and everyone within the community.

The Club’s much awaited sport and wellbeing facility, ‘Ballycran Community Complex’ has now successfully opened for business, though at the time of writing (April 2020), due to extraordinary measures to avoid the impact of a flu epidemic called Coronavirus (Covid-19), the GAA mandated that all of their units, services and facilities remain shut until advised otherwise.