Home / Down GAA SHC with Portaferry ends in a dramatic draw

Down GAA SHC with Portaferry ends in a dramatic draw

No one could have asked for a better day to play a Senior Championship match. The sights from Mitchel Park, Ballygalget of the Ards peninsula in all of its splendour was probably lost to an anxious spectator base as they fought hard to settle their nerves in what was to prove as being one of the best Championship finals for many years.  Ballycran came into the match as underdogs, on the one hand not a particularly great accolade as it reflected the run up games but on the other hand, it can be a bit of a distraction to mantle the favourite position.

Once again, Mitchel Park displayed the best of pitch maintenance, being dry under foot, grass cut to perfection and basking in positive comments from managers and players alike.  With not a single cloud in the sky, the autumn sun from the west neutralised the chilly breeze from the east and that set the backdrop for a game where two teams effectively neutralised each other’s performances to create a fantastic final that would ultimately end in a draw and a replay on a later date to be arranged.

It was a surreal final in some ways. With spectator restrictions in place, the sideline numbers were not able to generate the necessary noise to carry the field with might and gusto to jangle the nerves of the players. But in a great show of mitigating a drop in attendance and sympathetic to supporter aspirations, Down GAA adopted streaming innovation with local commentary and by all accounts, this was received really well. To augment the stream, Down GAA had their competent crew on hand to tweet, photograph and match stat the game for the wider enjoyment.

Prior to the throw-in, Ballycran had their meteorologist (a local pigeon fancier) forecast that the eastern breeze would swing down from the north mid game.  True to his word, the wind did swing around and as is generally the case at this time of the year, as the sun slowly dipped in its arc, the solar generated wind effect wained down to a gentle breeze and the evening chill began to establish its presence towards the end of normal time.

During the course of normal time though, Portaferry set out to control the game starting with a solid effort from their full back Caolan Taggart to deny early goals from goal hungry Colum McManus and Stuart Martin.  All three Portaferry forwards, Padraig Doran, Daithi Sands and Conor O’Prey saw plenty of action and between the three, amassed 20 points out of the total of 24.  Ballycran though had an underdog label to shake off and calmly set about rectifying the scoreline. At almost 25 minutes into the first half with a scoreline of Ballycran 0-4 Portaferry 0-6, Conor Woods placed a high free that had the hall marks of a point attempt but fell short almost vertically towards the end, slipping awkwardly in between a Portaferry defender and keeper Padraig McNally without touching a single bit of ash.

Again, Portaferry responded in turn just before the whistle as Stephen Keith went to ground to save a dropping ball into the box but a watchful Daithi Sands stepped in to simply flick the sliotar high up into the back of the net.  At the first half whistle the score line was Ballycran 1-09 Portaferry 1-07.

The second half of the game evolved into a cat and mouse affair, with Portaferry pulling a small lead and being pulled back by Ballycran who then moved ahead to be caught once again with a scoreline 1-13 to 1-13. With seven minutes to go, Padraig Doran placed a simple sliotar over the bar from a free to put Portaferry into an enviable position. With the clock counting down all the time, Ballycran found themselves in Portaferry’s half back line.  Nervous about squandering the opportunity and being pressed hard by Portaferry, Ballycran calmly played the ball back towards their own mid field and Scott Nicholson sailed the Sliotar over the bar for a life saving point.  At the full time whistle, scores were Ballycran 1-14 Portaferry 1-14 and the game went into extra time of ten minutes each way.

The first ten minutes offered up a classic ‘here we go again’ with one side, on this occasion Ballycran, hedging forward by three points to be caught at the turn with only one point of a difference.  First period of extra time ended with Ballycran 1-18 Portaferry 1-17.

During the second spell of extra time, Portaferry levelled the scoreline and then shortly from a Conor O’Prey free that fell short, Daithi Sands tidied up from an incredibly tight angle on a loose ball that rebounded off Stephen Keith’s stick.  As the pressure mounted on Ballycran to do something special before the final whistle, one of the games only altercations ended up with Conor Woods taking a free that once again dropped into Portaferry’s goal line for a straight goal.  Woods’ posture and swing mechanics suggested deliberate intention but likely to find a Ballycran hurl.  Just like a 20 foot putt in golf that drops into the hole, some would say it was lucky whilst others would say the player was aiming at the hole and had intention.  Regardless of anyone’s assessment, the scoreline finished 2-18 to 2-18.

With an abundance of nervous energy, the spectators left the Park in an orderly fashion and we thank Ballygalget for hosting the final, which will in all likelihood be replayed at Mitchel Park soon.  Stay tuned.

Here are some pictures from Saturday’s match. 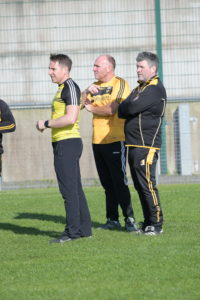 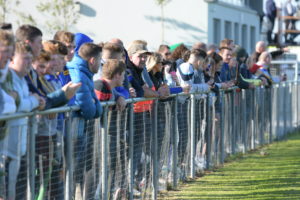 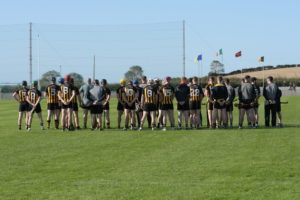 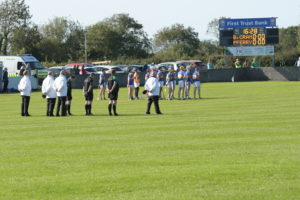 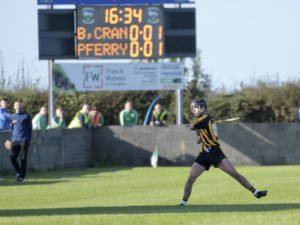 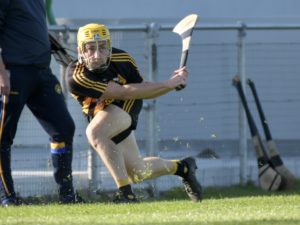 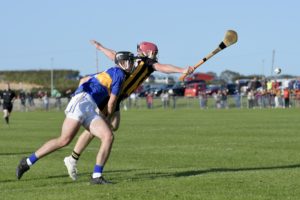 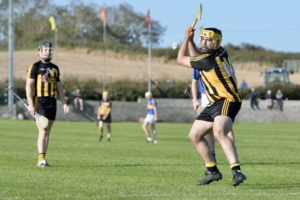 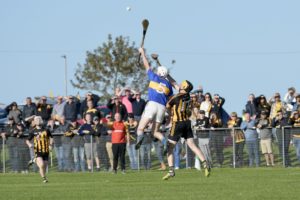 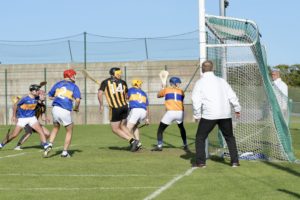 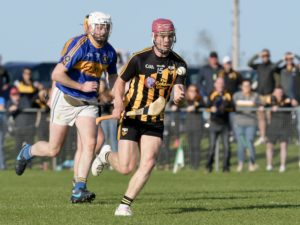 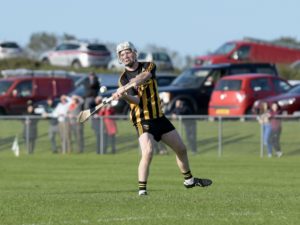 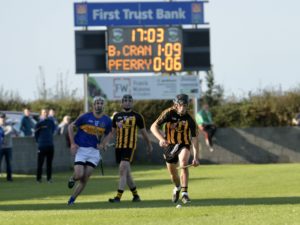 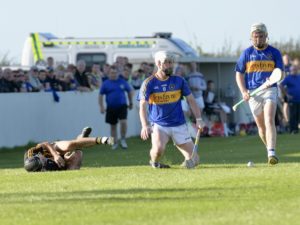 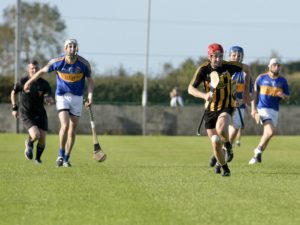 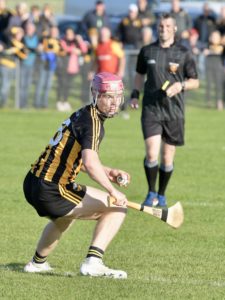 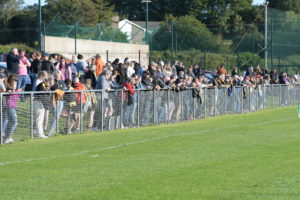 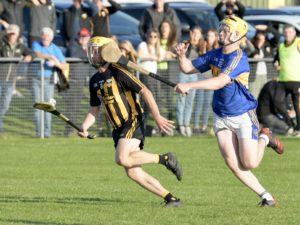 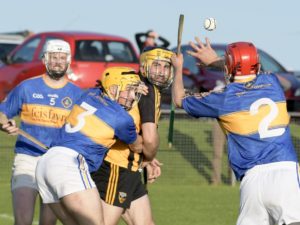 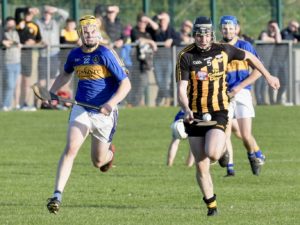 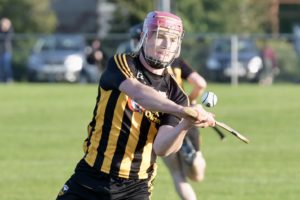 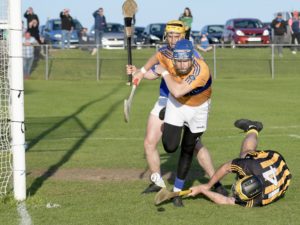 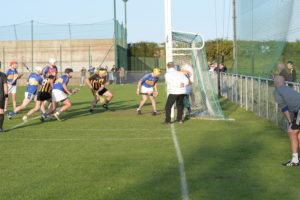 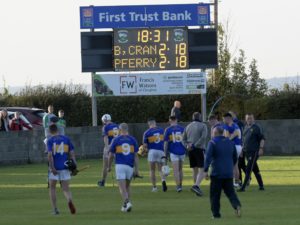