Home / Our Lockdown Story from the Torney’s

Our Lockdown Story from the Torney’s

It was a quiet house when Fionnula picked up the phone. Before long we’d revised her family tree and I’d made a discovery that Brendan ‘Who’ was her Dad. Sensing that the door might burst open shortly with a demand for something out of the cupboard, we quickly got down to business.

Fionnula, what was the biggest challenge in the initial phase of lockdown and how have you managed to adjust to this?

“You know what, it’s not been too bad to be honest. I say that because fortunately I’m working from home anyway and although Shaun has gone back to work now, he was at home and [laughs] had to step in and help out with just about everything, like I mean cooking, home schooling, tour guide and general entertainments manager. I guess one of the additional challenges was to try and keep the kids out of the front room where I work. You might be on the phone and the door bursts open but we eventually got that one sorted. Actually when you think about it, not only have you the challenge of managing the kids home- from-school for an indefinite period but there’s no place to take them like when it’s the normal summer holidays.” 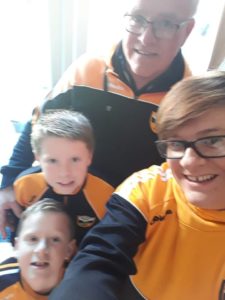 A family selfie of the Torney family

What have you and Shaun missed the most during lockdown?

“Both Shaun and myself love being around the Park to see the kids training or playing their matches. So not being able to head out is a big miss. I know Shaun in particular loves the Senior hurling and especially the run up to the championship, so that will be a disappointment if it doesn’t get to happen this year. When you are out at the Park, you get to meet folks, chat and have a laugh. We do miss that.” 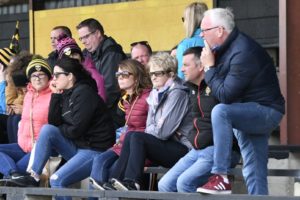 What are you looking forward to as we contemplate the easing of lockdown?

“Normality in the Torney household and in no particular order, getting out and about, going for walks with your friends, huddling at the sideline for a bit of craic, the gym, a visit to the hairdressers and a Chinese, [laughs out loud] god a Chinese, we haven’t had one in ages.”

And the last question for the parents, what activities have you managed to do that you probably wouldn’t have done without being in lockdown?

“Well now I have to mention Shaun’s handy work where he has built a lovely bit of decking. It’s great; Shaun and myself can sit there having a drink, chatting over to my neighbour and cousin Lorraine Brown. He also got some painting done along the fence but we didn’t complete on that task. There’s one strip not fixed and it’ll be a while before it is. That’s Joe Brown’s observation post and he loves to follow the Torney activities in and around the back garden. One activity Shaun enjoys is refereeing all the matches Joe has in his garden. Shaun sits at the window with his whistle and red and yellow cards. Joe just loves all of that.”

“Shaun has also improved on his cooking skills and missed his vocation as a primary school teacher, though he’d have to get used to lifting up the tossed exercise books.” [laughs heartily thinking about it]

“Because we can’t go visiting anywhere, Shaun took advantage of the good weather and off the three of them went to explore around Kircubbin. One day they headed up to Monaghan’s point and spotted a collection of big stones. These fascinated Conor and his Dad suggested maybe they were relics from the Viking era. Later that same night when he came home from the walk, he took to the Internet to learn more about the Vikings. Now his Granda Brendan says he’ll take him into Portaferry to learn even more about the Vikings and their influence around the town. That probably wouldn’t have happened had it not been for lockdown.”

Turning to the kids now, how have the kids adapted to home schooling?

“Well, Eoin has given me his honest opinion and that’s ‘I’ll just do what I’m told’ and he does to be fair, he gets on with just that [laughs] and nothing more. Conor’s a different story ‘bring back Miss Woods’. He says Miss Woods isn’t cross like his Mum and Dad!”

What have the kids missed the most during lockdown?

“Lockdown has hit Eoin hard because of his age. He misses his mates from school and going out to the Park to train or play a hurling match. He’ll be thirteen this Friday, not young enough to take each day as it comes and not old enough to go too far on his own. Conor just had his ninth birthday last Tuesday. He’s young enough to use his imagination to pass the time. He talks away to his mates on Xbox live.” 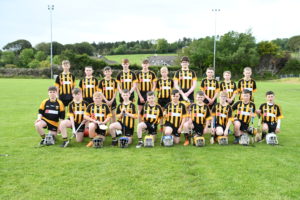 What did the kids say they are looking forward to the most after lockdown?

“Top of the list for Eoin is getting out to the Park – every night he says. In fact he has said ‘don’t say we are going out for an hour or so, it’ll be more and don’t even ask for how long, it’ll be until we want to go home’ “[laughs at the prospect]

“Conor can’t wait for his football, hurling blitzes and seeing his mates.” 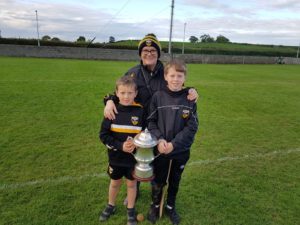 Finally, did the kids have a favourite part of being in lockdown?

“Eoin says ‘I love the lie-ins as we don’t have to get up early to go to school’. Both of them have really enjoyed the back garden and playing with the Jumbo rebounder.”

Thanks to the Torney Family for sharing their lockdown experience with us.