“It takes a number of committed people to run any GAA Club. Just like the teams on the field, they need to work like a team off the field” – Ulster Council GAA. Leading and encouraging that base of committed volunteers is very much the role of a Chairperson and one fine example of that in our own Club was the building and coordination of a Ballycran working party to review, author and submit a large volume of Club administrative information to the Ulster GAA for our Club Maith gold award.

Adhering to the widespread lockdown, it has generated an opportunity to review our Club Maith forms for the website and assess the task of refreshing some Club policies in preparation for the renewal process later in the year. The review highlighted a set of questions that could be conveniently answered by our Chairperson, Shane Gilmore and we grasped the opportunity to ask a few more around the genesis of the Club Maith project and to discuss the benefits for the Club. On a Google videoconference ‘hangout’ session, here’s how the conversation went.

Shane, how did you learn about Club Maith in the first place?

“That’s a good question [flexes back in his office chair], let me see, yes I had a discussion with a chap in work one day. He was from Slaughtneil and seemed to know a lot about Club Maith, although at the time they didn’t adopt the process. I remember that we had a long conversation about it. Looking back, it must have stayed with me as it was an interesting conversation.  At some point later on it came back to me and I started to reflect on it, in terms of what it might deliver into Ballycran”. 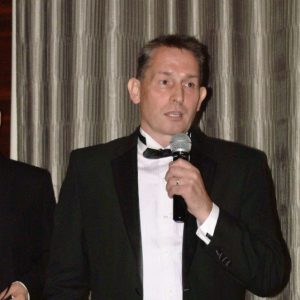 In that case then, can you take us back to the formative process and help us to understand the role you foreseen for Club Maith and the scale of the task that lay ahead?

“It became apparent to me that the Club Maith award was on the GAA wish list of things that they were suggesting Club’s should strive for and its attainment was a hallmark of a well run Club. Essentially you aim to comply with a list of criteria that are set out to help you organise and run an effective and efficient unit and then prove you are delivering on those criteria by means of submitting a portfolio for assessment. The opportunity for Ballycran to think about this more came around the time when we became one Club. That consolidation meant we could have a common administrative mechanism that worked across the Club. With that in mind, it opened up a great opportunity to investigate the commitment needed to successfully complete the Club Maith accreditation process and the value this would bring to the Club. We started out by contacting the Ulster GAA and got a copy of the proposed portfolio that we would need to comply with. Initially, we had a few meetings to see if we could get buy in and then how to get it off the ground as a project.

Those discussions also took place away from the Club; in actual fact I recall a small representation from the Club heading over to see Anita Brannigan from Clonduff one cold winter’s night. Clonduff had gone through the process already and Anita was a Club Maith point of contact that was offering to help us on our way. There were others openly willing to help us, for instance from the Ulster GAA but I’m liable to leave someone out so it’s enough to say we had good assistance to make us feel comfortable with the process.

When we eventually brought it all back, everyone was supportive of the task ahead. Thankfully Ballycran had a lot of this in place already, so it was about building a working party and aiming to formalise it all, filling in any gaps before building our portfolio submission and then we had to await the outcome. Early in that part of the assessment process we received some basic feedback from the Ulster Council that would allow us to make a few simple amendments, re-submit those corrections and thereafter we were proud to receive the notification that we had picked up the gold award. At the time, it was recognised as a mammoth task to go from a standing start and accreditation in ten months. We pulled it off”. 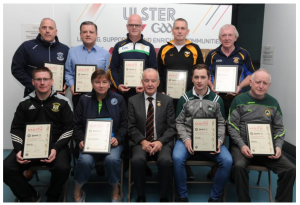 That leads me nicely to the next question, what have you learned from the process?

“Very simply, what good people we have around the Club that have great skills, very capable and with a huge vested interest in achieving the common goals for Ballycran. In terms of the process to get the award, we’ve enjoyed having the opportunity to look inwardly and challenging ourselves to think about how we do things”.

Do you think it played a part in the success of the recent building project and if so, what role would that have been?

“Yes undoubtedly. The concept behind Club Maith is to be able to say look we have attained this standard of operation as accredited by our Provincial council. It means we are a well run and serious operation that will allow others to have confidence in us as a credible entity and therefore worthy of investment. It sits nicely beside our Cairde Bhaile Crann initiative, both of which made the build possible”.

What is the next step for Ballycran and Club Maith?

“Timely question to be fair. We need to reapply for accreditation again later in the year. You see the qualification is for a three-year period. That process has begun with you finessing our forms on the website and now we will start to review the portfolio requirements for the resubmission”. It’s a marvellous opportunity for volunteers that have an interest in administration or business structures and also offers the opportunity to take away some worthwhile experience? “Absolutely, the Club will be looking forward to recruiting a few volunteers to help with this but it’s over to you in the meantime” [adjusts his conference headset as his beaming smile dislodges it a bit].

Thanks Shane, it’s been really good to get an insight into the background behind the award and using the Club’s website, which we didn’t have three years ago, we have a nice mechanism to be able to share this now with our readers.