2021 a year in review for Ballycran 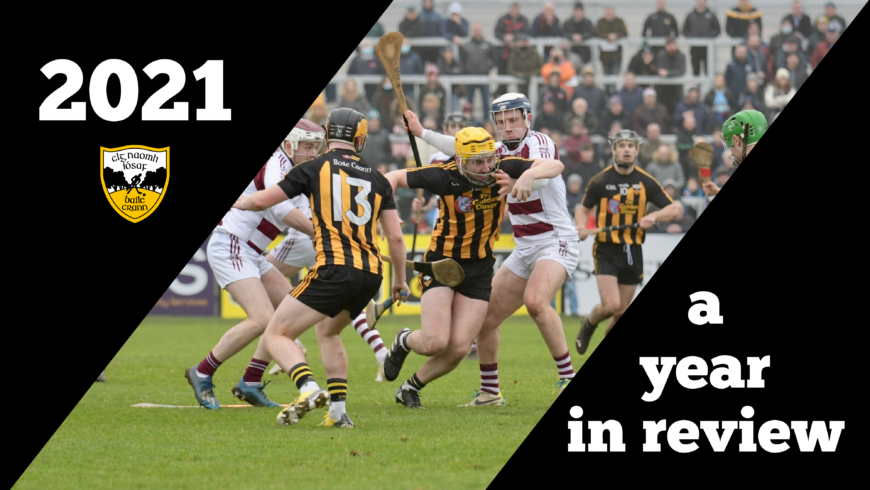 When you sit down to pull together the highlights from this year for a review of 2021, you can’t help being amazed by the sheer volume of activities that have happened across the year, despite working within the health restrictions associated with coronavirus. From fund raising, back to training, soaring summer temperatures out at the Park to an Ulster GAA SHC final on a cold winter’s day, we packed in a lot.

To save you sifting through the archives, we’ve managed to pull together a few of the highlights from across the year that we think are a representation of our active year and then encourage you to delve even deeper into the web news archive if you fancy that!  So, why don’t you pour a glass or cup of your favourite beverage with a mince pie or Quality Street and read on… 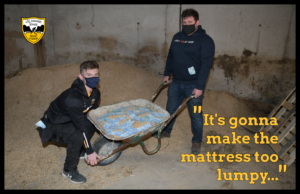 We kicked off the year with a fund raiser. The ever popular Last Man Standing. Our winner, Eoghan Hughes had some fun hauling the stash to a better lodging space other than under the bed.

This time of the year proves to be quiet around the Park, but a new committee slipped into place and plans were being formed around how to minimise the impact of Covid restrictions on the day to day operation of the Club. 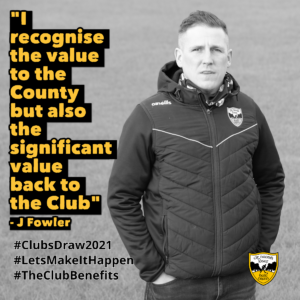 We then ran a series of membership reminders and wove those into the Clubs draw, which was a successful campaign.  We’ve had a couple of winners and no doubt all the winnings have found great personal causes.

No doubt we’ll loop back around later in the year and spin up another Clubs draw initiative.  The money raised helps the Club whenever traditional funding efforts are restricted due to the pandemic.  Keep watching out in the coming months. It could be your turn for a cash prize!

Funding was still on our mind and the entertainments committee ran a very successful Easter draw. We helped the British Heart Foundation to improve the awareness of defibrillator machines and training, particularly aimed at post schools on this occasion. Then we were looking forward to hearing about our Australian friends’ big sporting event on the outskirts of Sydney.  The 40th anniversary of the Central Coast GAA.  You’ll find the web article below. Sadly due to bad weather, the games were postponed to later in the year.

Things started to pickup in the month of April.  First up we had our Seniors presentation and we couldn’t have asked for a nicer day for the photo shoot down at Cloughey beach.

Senior presentation photoshoot on a sunny day down at Cloughey beach

Everyone was thankful that we could return to training in McKenna Park.  There was a lot of hope and anticipation that perhaps a return to games would follow soon.

We conclude our April highlights with a popular activity amongst members and friends, namely wild swimming.  Almost a year on, many of the swimmers are still enjoying their regular dip in the sea.  Here’s our web article here…

Ballycran’s wild swimmers make a splash around the Peninsula

With training underway, it was natural to ease into games next and out onto the field went the U15 hurlers, seconds and U17 Camogs.  May will be remembered as the month where we started to believe things were going to return, albeit slowly, to normal.

The month of June heralded the start of County activities and as the temperature soared up to the mid twenties, Down U16 camogs had a win over Tyrone in the Tesco series.

Down float on air with their Tesco U16 win over Tyrone

Away from the county scene, Ballycran hosted a blitz in the Park that enjoyed lots of sunshine…

Then the weather just got better and hotter. The annual Peader Ó Liatháin Cup was played in 30 degrees and cooled off by a mere 2 degrees towards the early evening but the lads were successful in taking a win from Meath only to lose against a slick Antrim squad in the final at Corrigan Park, St. John’s GAA Club, Belfast.

The three child protection officers from the respective Ards Clubs worked together to run a fabulous initiative aimed at informing our juveniles on smart device App selection and online security. It was a great example of what can be achieved for everyone’s benefit when we work collectively towards a common goal.

TACKLE is the theme for a combined juveniles Ards Club event

Our County senior camogie squad didn’t manage to get their win from a strong Cork, but what a day we had down in Pairc Esler.

Things were even busier in August, with a refresh of our Park advertising strategy, Cúl Camp, more camogie blitzes and a regional féile where the Ballycran lads were edged out in the final by Carryduff.

Regional hurling féile in Portaferry shakes off the rain

September teased us with possibilities for some silverware but alas that was to elude both our U17 hurlers and Camogs as they were unfortunate to lose out on their respective shield finals.

U17 hurling shield slips away from Ballycran despite a gutsy performance

The disappointment would continue into our first Down GAA Championship match, losing by three points, but the remainder of the games would go our way and lead to a thrilling final with our neighbours Portaferry, in Pairc Esler, late October.

Early October witnessed a hive of gaming activity as most of the juvenile blitzes and championship games concluded ahead of the weather turning chillier. Our senior camogs travelled to Clonduff for their senior championship game but despite a solid engagement, parted with a loss.  Interestingly, take a look at CD v BC 5 photo – Rhea being chased down by a Clonduff doppelgänger?

Clonduff squeeze past Ballycran in the Down Senior camogie round

The senior hurlers progressed in the Down GAA SHC, giving us all full-on entertaining hurling with wins all the way from here to and including the final.  Michael Hughes took to moving out of his traditional wing back position on occasions and you could say, got off to a flying start! 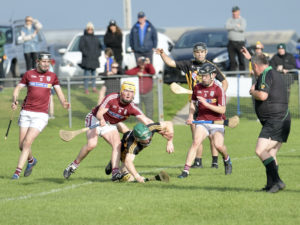 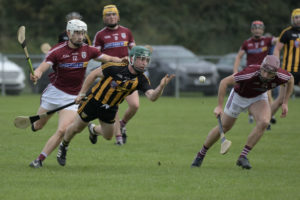 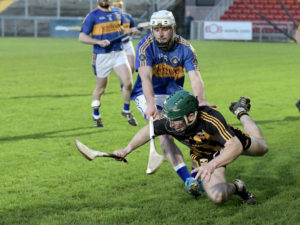 But he wasn’t alone, Sean Ennis and Stuart Martin had a go too! 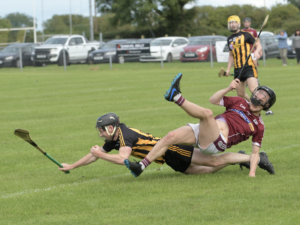 Sean keeps things under the radar 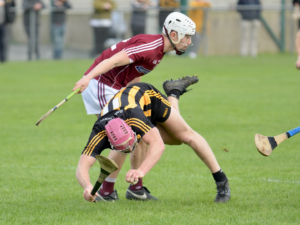 And Stuart could be heading for a nose dive

It wasn’t the only trend this year, we had a spate of folks throwing in the sticks, one in particular was an audacious attempt to deflect the ball! 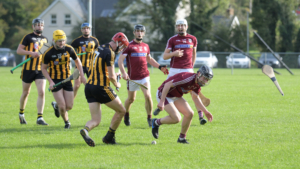 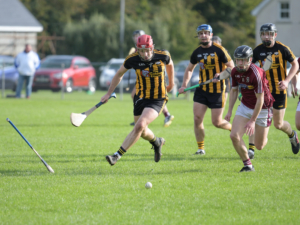 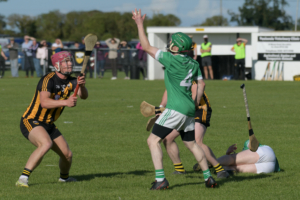 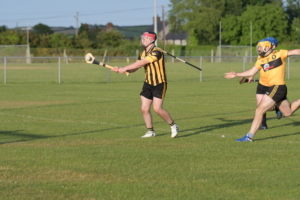 An audacious flick shot, not at all allowed but Spiderman would have been happy with it – Flying hurls – 4

And then there was the final. Diverted from Mitchell Park, Ballygalget, Pairc Esler became the amphitheatre for an evening under floodlights for enthralling hurling.  End to end, point for point, goals, long haul points, red cards, everyone was entertained until the whistle blew.

As the year was coming to an end, neighbours Portaferry made history with their camogie squad winning their first ever County Championship title, our Betsy Gray lads weren’t able to avoid the cup going to Portaferry and Ballycran’s Sean McCarthy and Adam Rogan were starting on a Mageean Cup journey that would eventually yield another historical moment. More on that later.

Down Camogie Senior Championship sees an historic win for Portaferry

The entertainments team laid on a few evenings for anyone interested in flower arranging, which is always popular and very usful at this time of the year. As we draw the year to an end, our Ulster GAA SHC journey came to a halt up in a foggy Corrigan Park, Belfast.  Slaughtneil kept a lid on the game to their benefit and held the four seasons high at the final whistle.

Click on the photo to launch the web article. 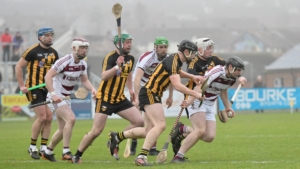 But we can’t finish up without mentioning another piece of history as Red High had an historic win in the Dub for their first ever Mageean Cup. What a tremendous experience for Ballycran’s Sean and Adam and the rest of the lads on the panel.

Click on the photo to launch the web article. 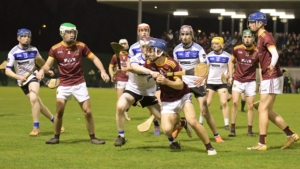 Sifting through the Mageean Cup photos for the review, I wonder how many of you spotted the amazing incident in ‘Mageean Cup (MC – 36)’?  Here it is again for your convenience. 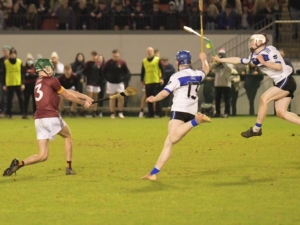 And just hot off the press, you may have noticed our recent Facebook post regarding the purchase of new machinery to keep our 3G surface in tip top shape. 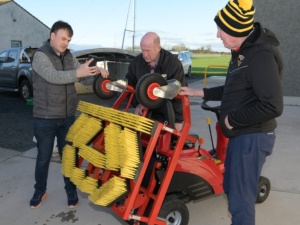 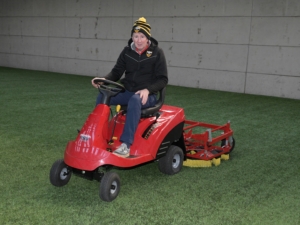 Sean takes the brusher out for its first trial run

Finally, we’d like to end on another highlight, namely Stephen Keith and Conor Woods were both named on the GAA/GPA Joe McDonagh team of the year for their contribution towards the County’s hurling performance. 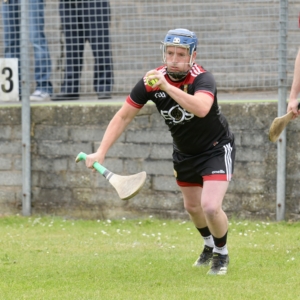 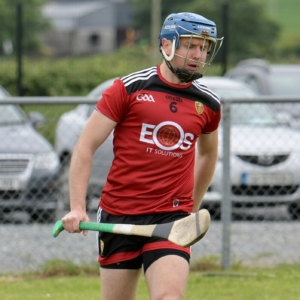 Well that’s our review of events from 2021.  No doubt we have missed a highlight or two that you might have preferred to see but that’s the beauty of recording our activities in the web site, you only need to browse to see it. That gives me a nice opportunity to remind coaches/managers and organisers of events in 2022 – if I’m not told about it, I won’t know about it!

Happy New Year to you from everyone in Ballycran!